Parshat Mishpatim: How do bias and judgement impact our lives?

This week’s Torah portion is Mishpatim Exodus 21:1-24:18. In it we receive 53 of the 613 commandments. Mishpatim begins: And these are the laws which you shall set before them (Exodus 21:1).  We look at this sentence and we wonder why it begins with “and these are the laws” and not just “these are the laws.” Generally the word “and” is not considered a critical word, it’s a conjunctive, a linkage word. Here it serves that precise purpose but in a very important way. Rashi teaches that “and these laws” implies that the laws to presented here (all 53 of them) are in fact a continuation of what is written before, what we had just received last week – the 10 Commandments. All the laws, not just the 10 Commandments are then understood to be from Sinai.

I want to highlight just one law for you. In Exodus 23:8 we find the injunction against taking a bribe, which is part of a section of laws dedicated to justice. Remember the expression, “a man’s word was his bond?” It presumes that worth of a person is based on their word, on their integrity, on their reputation. If this is true, then how much more so must a judge be a person of impeccable reputation and strength of character.  Strong enough to recognize and withstand bribery.

There is a story told in the Maayanah Shel Torah,  a work from mid-twentieth century in Eastern Europe that is the largest compendium of Dvrei Torah:
An impoverished widow once came to the beit din (courthouse) of the great sage Rabbi Yehoshua Kutner. Weeping bitter tears, she begged him to summon to the court a man   she accused of having wronged her.
Rabbi Yehoshua summoned the man to appear before the court, but referred the case to  another rabbi, refusing to preside over it himself. “The Torah forbids the taking of bribes,” he explained. “Do you think that a bribe is only a gift of money? Tears can also be a bribe that ‘blinds the clear-sighted’—especially the tears of a poor widow.”

This story reminds us that one can be bribed by more than just money. We are led to understand that a bribe is exactly that which blinds us – by greed, by desire, by any kind of emotion. As in this case, it doesn’t matter if our sympathies lie toward one party or the other, as a judge, the mere fact of having an emotional bias investment in a case is considered as if it were a bribe.

Although the majority of us are not working judges, we often encounter situations in our daily lives where we have to form a judgement, make a decision. While these are usually not decisions that can send someone to prison, they can be decisions that can change a person’s life for the good or for the bad. We can grant or deny someone a job, with just a few well-placed words we can influence on a person is perceived by others, we choose whether or not to believe someone.

In today's world, both explicit and implicit bias and judgement are apparent in ways that we may not have noticed at other times in our lives. This Shabbat and in the week ahead, pay particular attention to moments and causes of bias in your life. How do they impact you? Do they influence your decision making, your actions? Are there things that you never noticed before that perhaps you are now noticing for the first time?

Judaism is a tradition that is grounded in mindfulness. May we all live full and fulfilled lives of mindfulness.
Posted by The Itinerant Rabbi(t) at Friday, February 21, 2020 No comments: Links to this post

Yitro - A Journey to our Sinai Experience

This week’s Torah portion/ parasha – Vayechi (Genesis 47:28 - 50:26) – is the last in the book of Genesis/Beresheit. It seems almost fitting that it’s the final portion as it is about the deaths of two of our main historical and religious figures – Jacob and Joseph. What I want to discuss tonight is the actions of just one of those men – Jacob.

Jacob was blessed – or gifted- with knowing that his death was imminent thereby giving him the opportunity to say goodbye to his family. In this case, with blessings. He is the first person in the Torah to have warning of his impending death. Joseph does as well at the very end of this portion – but he uses his time a bit differently than Jacob.

What spoke to me in this parasha was the concept of blessings. Jacob blesses not only his 12 children but also Joseph’s children in the very last chapters of Genesis. The blessings to his sons are in fact a mix of blessing and prediction. The blessings to Efraim and Menashe, Joseph’s sons, where Jacob claims these 2 grandchildren as HIS OWN sons, is something quite different.

First Jacob then called over his two grandchildren, and in what I just read in the Torah, places his hands on their heads, and starts blessing JOSEPH -- giving him the famous "Hamalach" blessing (48:16), that the angel that protected Jacob from evil should also protect Joseph's sons, and that Jacob's name should be associated with them, along with Avraham and Yitzchak, and they should multiply in the land.

All these events seem inconsistent, unless we understand what they all mean...
This is why, when Jacob claimed the sons as his own, he made sure to stress that it was those two sons that were born in EGYPT (48:5). Their greatness and Joseph's greatness was that they were Jews DESPITE living in Egypt. And finally, although his hands were on the two sons, Jacob's blessing was that Joseph's children, and anyone who has to live in a non-Jewish world, should be protected throughout history so that we can all be proudly called the children of Avraham and Yitzchak.  The blessing that is given is: Y’simcha Elohim k’Efraim v’Menashe,
“May God make you like Ephraim and Manasheh."

This is the same blessing that parents all over the Jewish world give their children on Friday nights. What is special about Efraim and Menashe? Firstly, we are taugt that they are the first pair of siblings in the Torah who do not see each other as competitors. They actually get along! So we bestow upon our children the legacy of peace and harmony between brothers.

Also, they didn’t lose their identity. They were the sons of an important man in Egypt, living for much of their lives apart from any kind Jewish community, yet they kept to their heritage. This is a blessing to forestall complete assimilation. To learn how to live completely and fully in multiple civilizations. This is a blessing that says you can be successful and fulfilled regardless of where you live and what’s going on around you – and still remain Jewish.


Girls, by the way, are also blessed every Shabbat but with a different blessing – Yisemech Elohim k’Sarah, Rivka, Rachel v’Leah
May God make you like Sarah, Rebecca, Rachel and Leah

Each of these women possessed unique qualities that played essential roles in the strength and future of our people. The Torah is filled with accounts of these women, recording their insight, their strong and giving nature, and their sensitivity, leadership, and special ability to inspire others. Beyond this, all of the matriarchs were great, righteous women, who hailed from the homes of wicked people – what we call today " a bad environment." These women are all examples of people who recognize what needs to be done in order for good to prevail and they DO what needs doing, regardless of the personal price.

So where are we today?
Today we, as our ancestors, live in a world that presents us with many challenges – some personal, some tribal, some global.

It is hard to have a discussion with anyone in a minority group these days without the subjects of anti-Semitism, racism, gender harassment and too many other types of discrimination being raised.

Dr Jonathan Sarna, one of the most prominent historians of American Judaism, wrote that “Historically, hate-mongers and conspiracy theorists have repeatedly targeted out-groups during times of intense social and cultural stress in the United States.”  I’m sure this statement doesn’t surprise anyone. He cites examples in his writings of acts of hatred, public suspicion and outright acts of prejudice and violence throughout the centuries here in the United States against not only Jews but African Americans, Mormons, Catholics, the Irish… I could go on. Against those who act different, look different, pray differently, speak differently.

He concludes an article titled: Anti-Semitism is a Symptom (https://blogs.timesofisrael.com/anti-semitism-is-a-symptom/) … as follows:
“… with anti-Semitism back on the front page, [these] many historical examples of Americans targeting Jews and other out-groups during eras of intense social and cultural strain demonstrate the importance of distinguishing symptoms from diseases. America has experienced eras of crisis before, and Jews in America have been victimized before. In each case, anti-Semitism has been the symptom of larger social maladies, revealing more about the parlous [precarious] state of American society than about Jews.
“There are ways of mitigating symptoms of social stress: policing, education, vigilance, and the like. To repair the fabric of American society for the long-term, however, will require fresh leadership and a renewed commitment to shared values.”
So what can we do as individuals? We can act – participate in social discourse and social change. We can recognize that prejudice stems from – among other things – fear and ignorance. We can be, as all of my late grandmothers would say – Civil, polite, friendly. We can remember to smile. We can and must teach and share ideas freely and generously and listen to othersi, particularly those we disagree with, with respect and openness.
I know I am asking us to do what sometimes feels like an impossibility.  But that is one of the reasons I’m asking us to do this on the Shabbat of the Torah portion Vayechi. Where we, today, received a blessing thousands of years ago in the name of two brothers who were said to love each other, to get along, to treat each other with respect, kindness and love. After all, are not we all created B’Tzelem Elohim, in God’s image. Are we not all family – for all that means?
I will end tonight by doing something I rarely do. I would like to bless you all. I bless my children every Shabbat – in fact I did so just a few hours ago by phone. But I rarely bless large groups. But tonight it feels right.
Please rise.
Y’simcha Elohim k’Efraim v’Menashe
May God make you like Ephraim and Menashe

Y’varech’cha Adonai V’yismeracha
May Adonai bless you, and guard you

Yissa Adonai panav elecha, v’yasem l’cha Shalom
May the Awesome One’s face be lifted up unto you, and give to you peace


Posted by The Itinerant Rabbi(t) at Thursday, January 16, 2020 No comments: Links to this post

One of my favorite thinking places 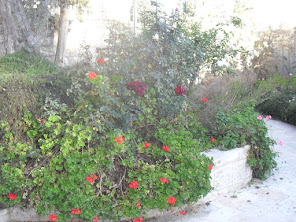 The Conservative Yeshiva Garden: come visit with me

The Itinerant Rabbi(t)
I am a quirky mixture of a liberal/traditional Rabbah living in Maryland and trying to find my way to live in an authentic balance of our tradition and our present. I love thinking about, talking about, musing about Judaism and life and Jewish peoplehood and Torah and general stuff like that. Journey with me!